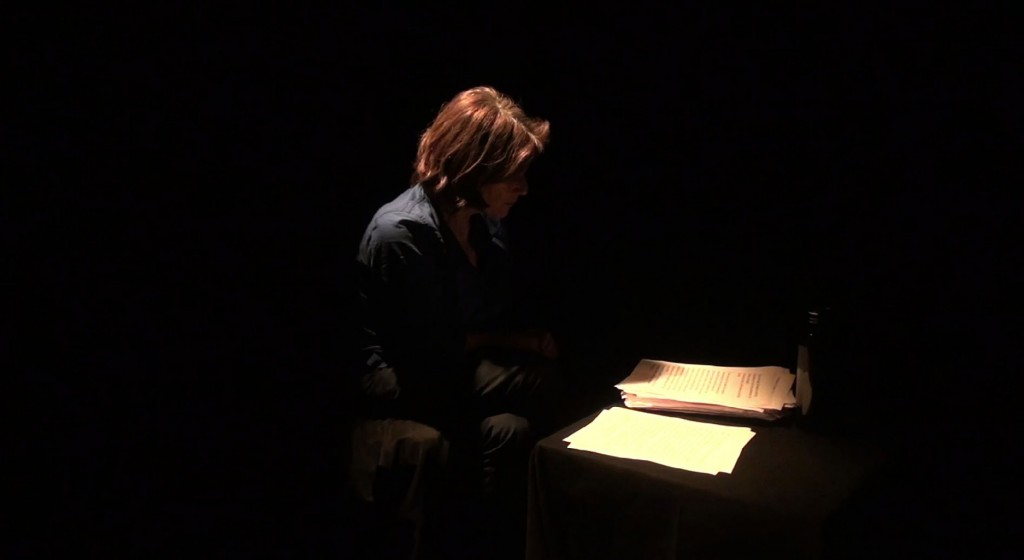 Casa Masaccio | Centro per l’Arte Contemporanea is delighted to present for the second time ESPORRE IL CINEMA, a series of exhibitions held annually in conjunction with the Premio Marco Melani that, for the 2021 edition, has been awarded in memory of Chantal Akerman (Brussels, 1950 – Paris, 2015). Chantal Akerman, film director, artist, actress, writer and screenwriter, was one of the most important directors of her generation. A leading figure in European experimental cinema from the early 1970s onwards, she played a crucial part in the gradual breakdown, so emblematic of the last twenty years, of the boundaries between the world of cinema and that of art. It was in 1995 that she started to use, often but not always, her full-length films as a starting point in the process of a reconfiguration of space and time.
The daughter of Polish Jews who had survived Auschwitz and taken refuge in Belgium, Akerman right from the outset had had an obsession with the space of the home, just as she had always sought a sense of ‘belonging’, even though she often said that she did not belong anywhere. Her emotional map had always entailed a tension between abstract evocation and the concrete elements of daily life and the home constituted a central focus of her practice. An ancestral and yet extremely modern concept that, in many of her films, became a theatre of solitude par excellence. STANZE. Sul custodire e il perdere (‘ROOMS: On Keeping and Losing’) is given voice and substance in a listed historic building, which was originally used for domestic purpose, and interacts with the non-standardized nature of the space, which already has its own story to tell. In keeping with its exhibition and cultural policy, on this occasion too Casa Masaccio is insisting on the idea of a semantic contiguity between the exhibition layout and its architectural setting with a show that explores the potentialities of cinema as three-dimensional space and as spatial as well as temporal experience. The stanze, physical places filled with metaphorical significance, are as much semantic traits of living as they are inner spaces and metric units of poetry.

The layout of the exhibition, making the visitor a participant in the dynamics and movement of the images, is articulated between sense of belonging and feeling of loss, thresholds and boundaries, between interiority and exteriority. The exhibition is introduced by Marcher à coté de ses lacets dans un frigidaire vide (2004), a sound installation that implies the idea of the traversal of a transparent labyrinth in search of a notebook written in Polish in 1920 that belonged to the artist’s grandmother. The only thing of hers to have survived, it is not much and at the same time a whole world. Also in the exhibition, My Mother Laughs Prelude (2012), Femmes d’Anvers en Novembre (2008), a multiple channel video installation in which the tale of feminine geographies that breathe in unison and the repetitive gesture of the woman smoking are related to the everyday rituality of Jeanne Dielman (1975), the film with which Akerman first caught the attention of the critics. From the urban sounds and shifting images, devoid of any narrative, of Tombée de Nuit sur Shanghai (2007) – harbours, water, ships, chance passers-by, huge illuminated signs and the line of the horizon of Shanghai and the night that in real time falls on the city – to La Chambre (1972-2007). Here, Akerman, director and at the same time silent actor, investigates reality by multiplying domestic space. The location of the aesthetic and conceptual inquiry into the passage of time is the interior of a room that is expanded through the hypnotic and circular movement of the camera.

On Keeping and Losing alludes to what is indestructible, what remains and resists all corrosion, but also to the process of editing required by montage, the true crucial act in the making of a film.

Chantal Akerman (Brussels, June 6, 1950 – Paris, October 5, 2015) was a Belgian film director, screenwriter and artist, a pioneer of feminist cinema who is today regarded as one of the most important filmmakers of her generation. Born in Brussels to Polish parents who had survived the trauma of the Holocaust, a recurrent theme in her work, Akerman reached the height of her success as an avant-garde director during the 1970s thanks to “Jeanne Dielman, 23, quai du Commerce, 1080 Bruxelles”, released in 1975 and still considered one of the masterpieces in the history of cinema. The director of over 40 films, Akerman was one of the first figures to experiment with the possibilities that cinema could offer the visual arts, in the form of installations. Recently, the Eye Filmmuseum in Amsterdam devoted “Passages”, a major exhibition curated by Jaap Guildemond, to her. Important solo exhibitions of Akerman’s works have been held at the ICA in London (2014-15), the Museum of Contemporary Art in Antwerp, Belgium (2012), MIT in Cambridge, Massachusetts (2008), the Tel Aviv Museum of Art in Israel (2006), Princeton University Art Museum in New Jersey (2006) and the Centre Georges Pompidou in Paris (2003). Akerman took part in “Documenta XI” (2002) and the Venice Biennale (2001, 2015). In 2011 a retrospective of her films was held at the Vienna Film Festival. The exhibition “From the Other Side” just came to an end at the Paris branch of the Marian Goodman Gallery.

STANZE. Sul custodire e il perdere has been made under the artistic direction of Claire Atherton, Akerman’s close collaborator and editor, representative of the Chantal Akerman Foundation, and with Carole Billy, associate director at the Marian Goodman Gallery in Paris.