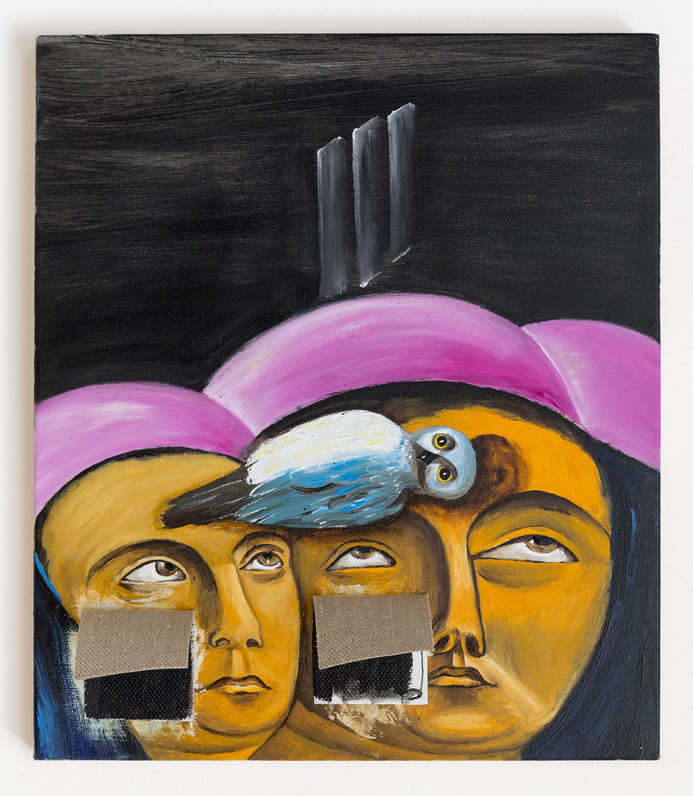 At 7 pm on 24 June Entro dipinta gabbia, an exhibition curated by Rita Selvaggio presenting works by Enzo Cucchi and Enrico David that have never previously been shown, will open at Casa Masaccio.

The title (‘In painted cage’) is taken from the first line of one of Giacomo Leopardi’s early poems known as the Puerili, or ‘Juvenilia’, which, as an exercise in language, bear witness to the poetic apprenticeship of a child. The poem ‘L’ucello’ (‘The Bird’), written by Leopardi at the age of twelve, can be likened in a way to a fable and was already a small paean in praise of escape. Mockery of an almost Mozartian arcadia, in addition to having the privilege of being the first expression of the poet’s desire to flee from the his ‘barbaric native place’, it underlines his wish to soar above all human mediocrity. Suspending the dumbness of bodies in the canto, with veiled melancholy and carefree abandon, between word and word and the silences that are laid down between them, there are already hints of his later and more figurative metaphors.

In Casa Masaccio, the home of weighty bodies par excellence, the interventions of Enzo Cucchi and Enrico David, following a law of necessity that does not belong to the plane of becoming, hold together light and shade, the impalpable realities of the mind and the awkward ardour of beauty, as well as the this and the that. Phantoms and breaths of expectation caught in their rapid passage, images of a vague future, of the time that has been lost and the time that will come, they speak of the body and make the body present, bringing back to light its metaphorical essence that reduces the complex to the simple.

Images teem feverishly on Enrico David’s great tapestries. Hung from the ceiling on wires, they float in the air and turn into what look like mobile walls that, redistributing the geometry of the space, lead us into the atony and desert of feeling. Surfaces of wool closely knotted day after day or, more simply, carpets that fly, safe from the shadows of the real.

As last horizon, Enzo Cucchi places his bronze sculptures in Vicolo Rossi, the chiasso at the back of Casa Masaccio, regenerating it and bringing it back to life through new pieces of identity. In this sort of breathing space, almost devoid of sunlight, Lo Zoccolo (2016) and Sotto la Coda, Nessuno (2016) restore light and fire to the everyday. The world, made up of sounds and tangible bodies, takes back its cardinal place, while the dawning day brings the concreteness of reassuring noises.

Entro dipinta gabbia is among the side events of Ytalia – Energy Thoughts Beauty.